Bitcoin’s price rebounded slightly today, which has increased by 1.23% over the past 24 hours, according to Coinmarketcap.

In addition, this is also the first time that investors have invested money in all personal digital assets within nine weeks, suggesting a positive shifting towards market sentiment.

Institutional investors mainly target bitcoin assets and Ethereum assets. Nearly 62% of the total funds (an estimated $39 million) flow to the Bitcoin dedicated fund. After three consecutive weeks of withdrawal of the investment in Ethereum, the cryptocurrency asset, the total inflow last week was $18 million.

As the second-largest cryptocurrency in the market, Ether was trading at $2,318.91 and has risen by 9.22% within a week. 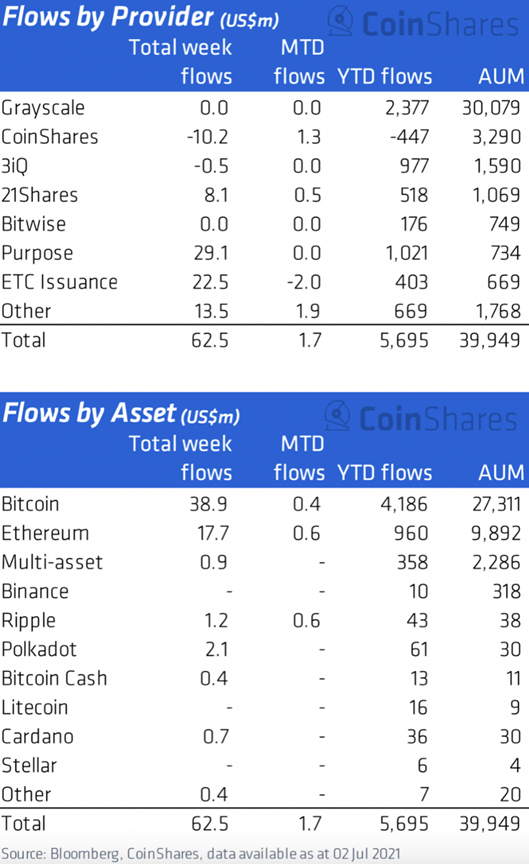 According to statistics, investors also turn their capital to Ripple (XRP), Cardano (ADA) and Polkadot (DOT) investment products. The total inflow of DOT is up to $2.1 million, which is the most significant weekly inflow among the altcoins.

Meanwhile. the inflows of altcoins such as XRP and Cardano were $1.2 million and $0.7 million, respectively.

The small investment in other altcoins and the low investment in the first-level multi-asset proves that most investors only focus on mainstream Bitcoin and Ethereum rather than diversify their portfolios to accommodate multiple cryptocurrency assets.

However, Coinshares stated that despite breaking the continuous outflow of funds last week, Bitcoin's transaction volume is still at its lowest level since November 2020, saying that:

"A similar observation was seen more broadly across the whole of the Bitcoin ecosystem with volumes down 38% relative to the average for 2021."