Speaking exclusively to Head of PR at ChangeNOW Mike Ermolaev, 17-time Billboard Global Top 10 rapper French Montana has made a big announcement on entering the cryptocurrency space – a move that will revolutionize the music, the Web 3, and the NFT ecosystems. French Montana previously revealed at Miami NFT Week 2022 that his upcoming album "Montega'' will come with a series of digital and physical experiences that will tie the metaverse to the 'real' world.

French Montana spoke with Mike Ermolaev about the potential of NFTs and why the rapper, who already has an established career in the music industry, decided to venture into the world of cryptocurrencies and the metaverse.

During the interview, French Montana expanded upon his vision for the French Family Membership NFTs collection, the brand new NFTs community/family of rap star French Montana. It will include 1,000 NFTs in the "Proof-of-Collection" style, which means those who own the collection would receive exclusive and privileged “types of experiences and possibilities, exploring the full potential of the physical and digital worlds.”

“The evolution of the cryptocurrency and NFT market has shown that NFTs that do not have a community proposal quickly lose their value as they are not based on real benefits but only on FUD and speculation. Furthermore, offering APYs with extreme profitability, as happened with UST/LUNA, turned out to be a failed proposition that only makes users lose their money,” the rapper said. 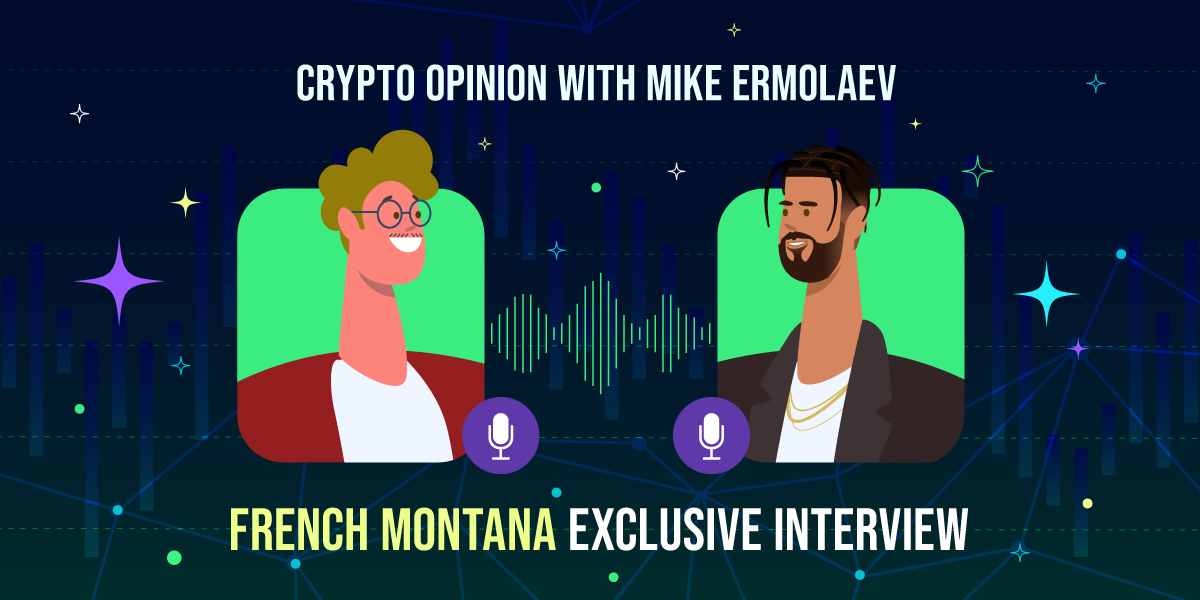 The New Era of NFTs

“The market experience has shown that projects based on memes and “Come Get Rich” promotions are nothing more than projects whose future is uncertain and often end up harming investors. By putting technology first, these projects have become highly reliant on royalties and hype to become a successful business. These events show us that success lies in focusing on projects that combine technology and real use cases,” the artist explained.

According to French Montana, the true value of non-fungible tokens (NFTs) is not that they are an immutable digital representation of audiovisual items. “It's not just animated gifs and jpgs that are hashed on the blockchain, or items intended for speculation and FUD. The true value of NFTs lies in building a new digital identity and a new way of connecting communities through physical and digital experiences on a Web3.0 chain.”

Montana said that prior to the pandemic he had heard about Bitcoin and cryptocurrencies but never paid much attention to them. The pandemic, however, brought worldwide attention to the subject, which prompted him to read and seek to understand more about it.

It was then that he concluded it wasn't just about digital currencies, but also about a new form of 'contract' that could give artists and the community back their data and ownership rights.

“When I started out, DVDs were the only game in town. Soon, YouTube became a huge deal. After that, the same happened with Instagram and TikTok. Now NFTs will be the next wave of technology to change the way music is produced and distributed and I want to be at the forefront of that with the French Family NFT,” the rapper said.

French Montana said that he owns 100% of the production and distribution rights to his new album Montega, and Web3 is precisely about people being able to choose how their data is used. People want to own their preferences in Web3, such as their favorite songs, their artists, their avatars, etc.

“I want to own everything I produce and with NFTs I can share ownership of my production with my fans, with the French Family, who are the people who really make me grow as an artist, who come to my shows and who encourage and support me to continue doing my work”, French said at the opening of the Miami NFT week.

Now the artist revealed to Mike that French Family Membership will be a user identification within the French Montana digital family, where the holders can get free access to all the events by French Montana or by some of French Montana’s friends in the USM Metaverse and the NFT marketplace.

Each holder can also release a virtual fashion brand cross-over with French Montana. The virtual brands are only for 3D avatars or for wearables on 3D avatars in the United States of Mars, USM. The design (Logo, images, words, pictures, videos) of virtual fashion brands’ should be voted by FM holders. More details will be announced by the French Family.

In addition, there will be more perks for French Family Membership holders linked to French Montana and some French Montana friends in USM, like the exclusive and unique collection DRWT PFP (under construction). More applications and projects are already being designed by the teams and will be announced exclusively for French Family Membership holders.

“This is our concept of building a community around French Family Membership. We are not talking about price speculation based on fomo, fud, attention, and influencers here. We are building a new decentralized digital community that expands individual possibilities while creating benefits for the entire community together,” he said.

French revealed that each owner of the French Family Membership collection will also have rights attached to Montana's new album "Montega". The artist's new production will be a connected music album with unique digital and physical experiences that will be unlocked through a collection of NFTs called "French Montana's Music Album NFT" (MTG).

For this collection, three categories of MTG NFTs will be produced: Super Rare, Rare, and Normal, each with different benefits. And each member of the French Family will receive, via airdrop, super rare NFTs, which will unlock other exclusive benefits such as the digital version of the new Montega album, backstage access to French Montana concerts until 2025, and commercial and sales rights to the Montega album.

“We are creating a truly open and community-driven ecosystem for the French Family. This is not just an NFT project. We are talking about a real revolution in the cryptocurrency industry. The holders of a French Family NFT will truly be part of the French Montana family and, in doing so, will share with the star the benefits of everything we are creating, owning an NFT French Family Membership is not just a matter of commercial rights linked to the Montega album. There is so much more,” said Jeff Watney, the visionary behind French Family Membership NFT.

French Family Membership also means being part of JAZ, the layer 2 blockchain linked to the collection, much like Solana or Polygon. This will eliminate problems similar to those that BAYC faced in the launch of Otherside, such as high gas fees.

Furthermore, the new layer 2 blockchain will be born as the native network for the French Family Membership NFT and for all other projects that are already being built on the network. The blockchain will also have a development package that will allow the creation of dApps, play-to-earn games, decentralized finance (DeFi) applications, and NFT projects, among others. All this has been linked to exclusive and unique benefits for holders of the French Family Membership NFT collection.

French Family NFT holders will benefit from nodes of the new network and, in addition to being validators of the new layer 2 solution, will receive rewards for transactions related to all JAZ-based projects.

'We're Going to Change the Game'

JAZ will be a decentralized and open blockchain solution for the entire community, comparable to what Solidity is to Ethereum. Developers will be able to create various blockchain-based applications through the JAZ development package. One of the projects that is already being built on JAZ involves a major Web3.0 project that will have an impact on the music industry and is already attracting attention from big names in the music ecosystem behind the scenes.

“Web3 gives musicians more control over their art and creation. Most artists only get 12% of what labels make. With 100% control over how my music is distributed, my community can grow. If I’m not mistaken the music industry makes $13m an hour with music and web 3 is definitely a revolution for artists to start gaining more capital,” French Montana said.

In Montana's opinion, the combination of NFTs, Web3 , and the metaverse could be an important tool to eliminate prejudice and allow people to live up to their full potential.

“Web3 is a powerful tool to build equality against the real world while there is no even. Early builders, creators and contributors will have more power and this more power is more possibilities for creating a better world. We are definitely going to change the game,” he said.

Mike Ermolaev, the Head of Public Relations at ChangeNOW.io, conducts exclusive interviews with prominent crypto experts to provide beginners and seasoned crypto investors alike with valuable insight into the world of crypto. This interview has been first published on Benzinga.

The author would like to express his gratitude to Cassio Gusson.