As Bitcoin continues to consolidate between the $30K and $40K range, BTC investors holding coins between two and five years are still confident about their investment.

“Bitcoin aged between 2y-5y old was accumulated between 2016 and 2019 at prices ranging from $640 to $20K. Conviction of these investors remains strong this cycle, now holding over 22.9% of the BTC supply.” 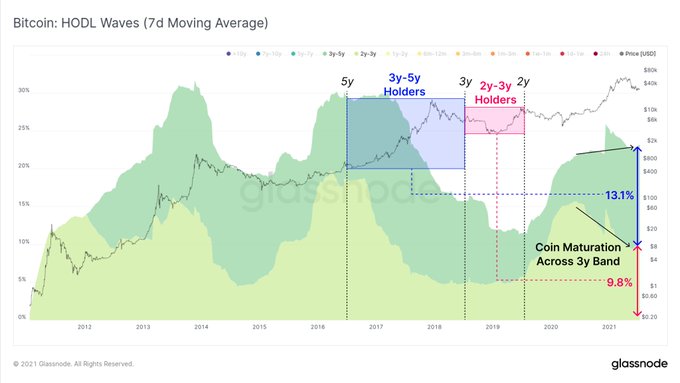 Notably, these investors are still in profits as Bitcoin was hovering around $33,230 during intraday trading, according to CoinMarketCap.

It, therefore, explains the reason why long-term BTC holders remain in an accumulation mode. For instance, Bitcoin addresses holding between 100 and 10,000 BTC recently hit 9.13 million coins.

However, things have not been rosy for investors who have been in the Bitcoin market for only 6 months because their returns are in the negative trajectory, as acknowledged by Santiment. The crypto analytic firm stated:

“Bitcoin’s average return for 6-month investors is sitting at a very low -27.81%. When traders are this underwater, FUD typically arises in the form of negative-driven posts. Keep this negative bias in mind & take crowd takes with a grain of salt.”

Santiment had previously noted that Bitcoin’s average trader returns had dropped to a 14-month low as FOMO factors had become prevalent.

The crypto market has also been limping because trading volumes in exchanges plummeted by more than 40% in June. This was triggered by factors like Chinese authorities intensified crypto mining crackdown implementation.

Bitcoin has nosedived by over 6% in June, whereby it touched lows of $28K not seen since January.

Some crypto specialists expect Bitcoin’s volatility to occur shortly. However, whether this will kickstart the bull run previously witnessed in the crypto market remains to be seen.